I’ve been reading Leonard Shlain’s The Alphabet Versus the Goddess, a twenty-year-old book I’d never heard of till days ago. The author’s thesis, in a very crude nutshell, is that the invention of writing rewired the human brain by prioritising left-brain functions (linear, abstract, masculine) at the cost of right-brain ones (wholistic, visual, feminine), and upset the balance of masculine and feminine power in human society. He reckons this direct relationship of gender power to literacy can be traced through history, and that we’re now, with the proliferation of technology, enjoying a resurgence of the visual and, hopefully, on a path to a wiser integration. 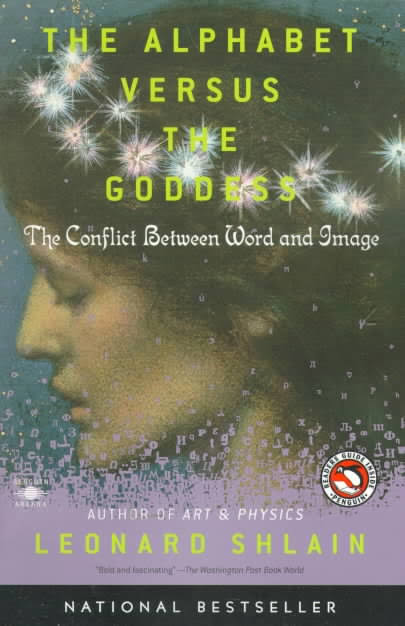 But dear God/dess, this book – it’s momentous – lucid, scholarly, comprehensive. It answers the central question of our times, the very one I’ve been puzzling over for decades: is misogyny inevitable? Is it too deep in human culture or biology to erase, or even to dislodge from dominance? No and no, says Shlain, and proceeds to explain himself with forensic clarity and spectacular breadth of example.

But what got me up to write to you – what enticed me to leave the book itself and vent my reaction to it – was learning about Tiamat, the murdered Great Mother of early Mesopotamian civilisation. At school I remember learning about the Code of Hammurabi, among the world’s first written systems of Law, inscribed on a great phallic stela (though its phallosity, naturally enough, wasn’t mentioned to us third-graders) in the Babylonian town square. My teachers also didn’t mention that fully a quarter of Hammurabi’s Code was devoted to restrictions on the sexual rights and freedom of women. Nor did any of them ever mention (having doubtless no knowledge of any such thing themselves) The Seven Tablets of Creation, published around the same time.

The Seven Tablets of Creation is a 170-line poem recording the murder of the Great Mother Goddess Tiamat by her son Marduk, who created the universe and human beings from his mother’s blood, milk, kneaded flesh, and dismembered body parts, and doomed humans to serve as slaves to the gods, toiling on her carcass to make their food and wine. There’s further gory detail, sub-plots with other brothers and a divine-son-martyr, but as Shlain says, “Alongside the thousands of creation myths of other cultures, The Seven Tablets of Creation stands starkly alone. Three features distinguish it. First, in the field of comparative religion, there does not exist a more misogynist and macabre story. Second, this is the first creation myth to appear in written form. And third, this myth originated in a proto-Western culture.”

So we do actually have a date for the death of the Goddess and the rise of patriarchy – somewhere around 2000BCE, give or take about 300 years. The Old Testament Book of Kings, the earliest parts of which were written in the 700sBCE, is a vivid source for the history of this period from the Jewish perspective. It’s a blood-drenched hymn to the patriarchy, retelling the legends of victory and celebrating the massacre of thousands of (mostly foreign) followers of the great Goddess, She whom even the Jews once knew and worshipped as Malkuth haShamayim, the Queen of Heaven.